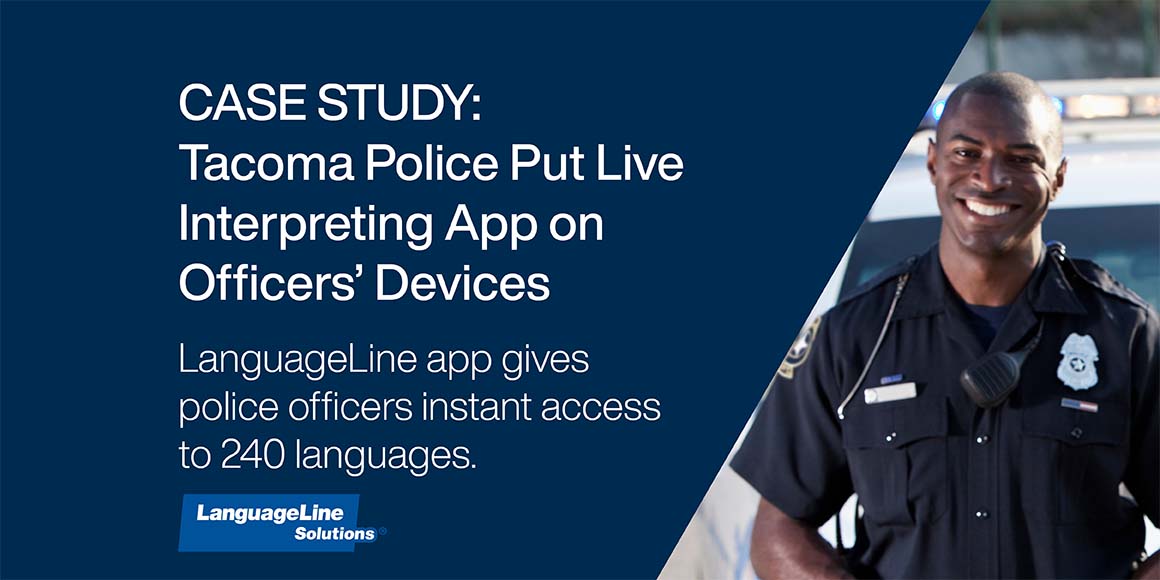 The following blog was originally written by our team in the US.

However, the dynamics of the circumstances, along with the ethos and approach of LLS and those organisations it supports, are universal – as are the services available to support such situations.  Happy reading!

Tacoma police officers are using a mobile interpreting app that provides access to live, professional interpreters in more than 240 languages. They are using the app to assist during emergencies.

In an emergency, it is vital to quickly ascertain information. Challenges arise when police officers and citizens do not speak the same language.

Officers say they used neighbours or family members – even children – to interpret these situations in the past. Now all they have to do is open the LanguageLine interpretation app, press a button for the desired language, and request a video or audio-only interpreter. A professional interpreter comes on the line within seconds.

WATCH: Tacoma Police Are Using an App that Gives Them Access to Interpreters in More Than 240 Languages

LanguageLine has more than 16,000 professional interpreters, with coverage in more than 240 languages.

"A lot of these people are experiencing domestic violence, they may have been sexually assaulted, or they may be some other victim of a crime and we certainly don’t want children to have to interpret for something like this," said Lydia Zepeda of the Commission on Immigrant and Refugee Affairs.

The commission has worked with the Tacoma Police Department to introduce a better way for officers to help people in crisis. This resulted in all officers getting the LanguageLine interpretation app on their mobile devices.

When the app is opened, the user can scroll or use the search feature to find the language they need.

Zepeda says the new tool gives people who are experiencing an emergency an easier way to be heard and get the help they need. She says it also protects children from having to be involved.

Tacoma is one of the most racially diverse cities in the state of Washington. Nearly 40 percent of individuals living in Tacoma are Latino, African American, Asian and Pacific Islander, multiracial, or Native American.

As of 2019, almost 24 percent of Tacoma residents reported that they were born outside of the United States.

The need for language access has grown unpredictable as our society has become more complex and multilingual. By assisting every individual regardless of their language, culture, or ability, you deliver higher-value experiences at the moment of need. The challenge is that these “moments of need” arise with increasing frequency as we become more linguistically diverse. They might surface at a doctor’s office, a school, a bank, or simply on the street.

The LanguageLine mobile app puts the power of nearly 14,000 interpreters in users’ pockets. It makes professional linguists available on-demand with just the touch of a button.

With a cellular signal or WiFi and a smartphone or tablet, the LanguageLine mobile app allows users to instantly reach a video or audio-only interpreter regardless of location.