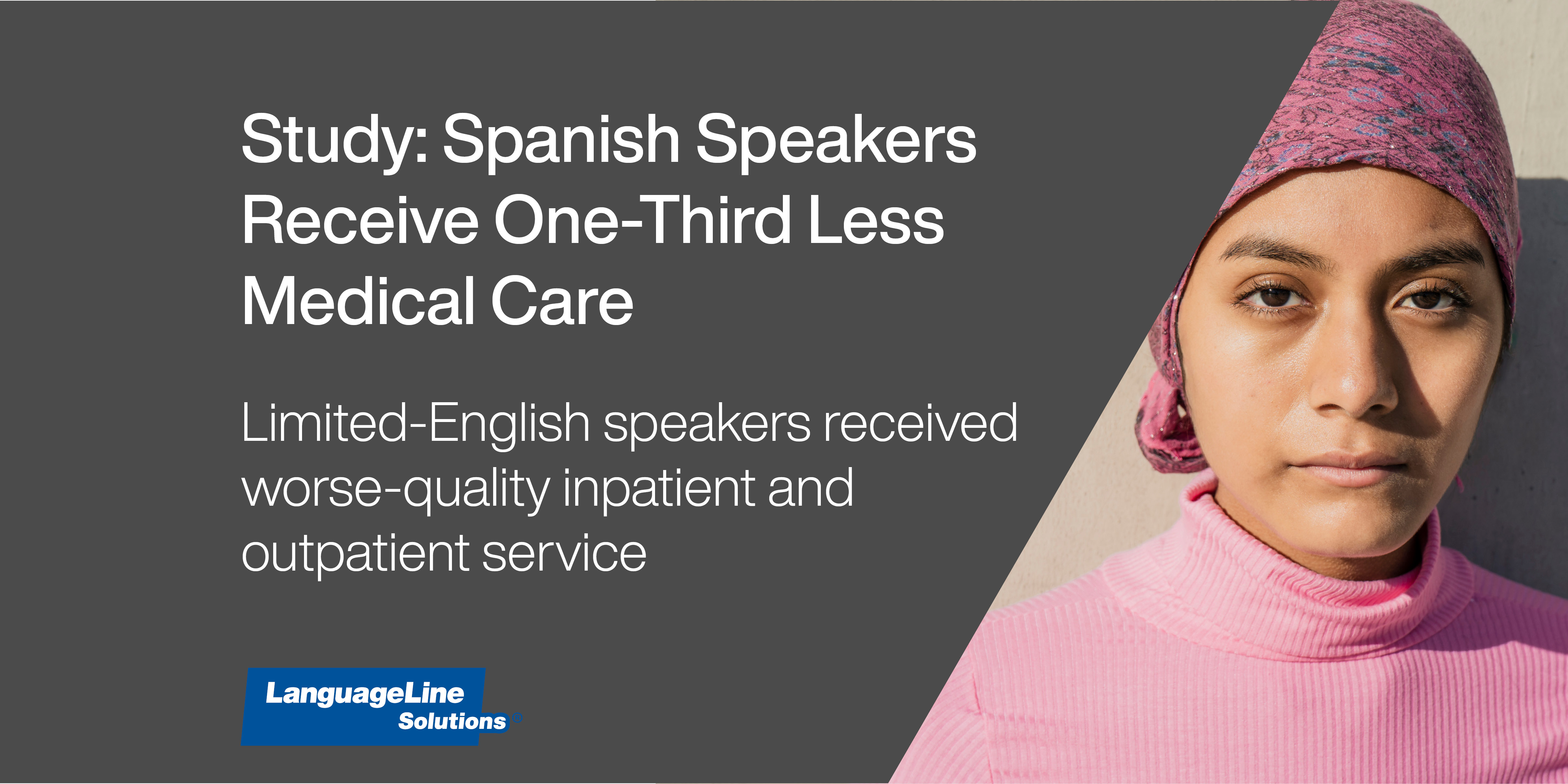 Language barriers may lead to significant inequities in health care delivery, a new report suggests. The study, published in Health Affairs, found that Spanish-speaking Americans received about one-third less care (based on spending) as compared to patients whose primary language is English.

A new study published in Health Affairs revealed that Spanish-speaking Americans receive significantly less care in medical settings – specifically one-third less care based on spending when compared to English-speaking patients. Even worse, the gap may be widening despite the easy availability of on-demand interpretation and translation.

According to the report:

We have previously reported that one in five U.S. residents speaks a language other than English at home. Almost 14 percent of U.S. residents (41 million people) speak Spanish at home, while 8 percent of the population (25 million people) have limited English proficiency. New Census figures show the nation is growing much more diverse, suggesting that these language issues are likely to become more pronounced.

Language barriers may stand in the way of care in several ways, the report noted. Patients may resist care if previous experiences were negative or they were confused. Difficulty navigating the insurance and healthcare systems may extend these challenges further. Patient portals are mostly designed in English, as are most telehealth platforms. Both of these technologies have gained critical mass during the pandemic.

READ MORE: Can Limited-English Speakers Use Telehealth? The Answer is ‘Yes’

The study noted that use of interpretation and translation services would go a long way toward helping this issue; however, progress has been inconsistent in this area.

Benefits Pro summarized that changes to reimbursement and training of providers may be necessary to adequately address language barriers and health inequities associated with those barriers.

“At this time only fifteen states’ Medicaid programs or Children’s Health Insurance Programs reimburse providers for language services, and neither Medicare nor private insurers routinely pay for such services,” the report said. “Ensuring adequate funding for interpreter services is essential if health system leaders are to prioritize language access and integrate it seamlessly into the daily workflows. In addition, policy makers should consider establishing and enforcing national benchmarks for the certification and training of qualified medical interpreters and qualified bilingual medical providers.”

It is important to note that providers are required to offer interpreting and translation services to LEP patients under Section 1557 of the Affordable Care Act, both free of charge, and cannot require a patient to be responsible for providing his or her own interpreter. Title VI of the Civil Rights Act of 1964 prohibits discrimination based on national origin (among other things) by any organization receiving federal funding. Failure to provide necessary documentation in a language the patient can thoroughly understand can be considered discriminatory under the CRA.

Likewise, healthcare providers should be aware that on-demand interpretation is available 24 hours a day, seven days a week. Translation services for written material are similarly accessible.

All that is required on the part of the provider is a determination to provide equal access to all people, regardless or language or culture.