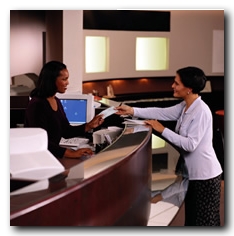 Rosa Lopez is a single mother who was born in Oaxaca, Mexico. She works seven days a week as a janitor in an office building and has raised her two children with one burning desire first and foremost in her mind:

To give them opportunities she didn’t have.

After years of hard work and sacrifice, Rosa became an American citizen in 2008. And in 2014, she bought her first home. Her two children are now in college and have bright futures.

Banks have helped Americans realize this dream since 1791, when Alexander Hamilton decided the United States needed a standard form of currency and a system to handle the enormous debt left from the Revolutionary War.

The dream is still alive, but many immigrants cannot take full advantage of the financial opportunities available to them, and language access plays a big part in that. Not only do they bring prejudices against financial institutions with them from their place of origin, they are unable to build trust and establish relationships with banks due to the lack of understanding and communication. They simply cannot comprehend how banking works, so there is little or no interaction.

The following statistics, based on the 2013 FDIC National Survey of Unbanked and Underbanked Households were truly surprising:

According to a Forbes article on the topic: “One in five households has zero or negative assets. Twenty-five million have no credit score, which makes them invisible to the mainstream U.S. financial system. Why is this important? Because a credit score—and access to financial services—is usually necessary to buy a home, build a business, or send your children to college.”

In other words, the American Dream is unattainable for the unbanked.

When taking a closer look at the data, another important point stands out. The Corporation for Enterprise Development (CFED) report (based on the FDIC’s similar 2009 study) made this important correlation:

The states with the highest concentration of unbanked Americans were Texas, Mississippi, Arizona, Louisiana, Alabama, and New Mexico. All of those states contain high numbers of limited English proficient (LEP) residents, with Spanish being the predominant native language among these individuals.

While the surveys did not focus specifically on this topic, according to the FDIC report, “43% of banks noted ‘multilingual staff availability’ was a key strategy to develop trust, accessibility, and relationships between bank branches and unbanked and underbanked individuals.

Consider branches of your bank that are in areas with a high concentration of LEPs. According to these statistics, a large number of those people are currently using expensive and inconvenient alternative banking methods and probably storing large amounts of cash on their person or in their home, making themselves targets for crime. Thinking about it that way, making a concerted effort to reach out to the unbanked and underbanked in your community is a public service that can ultimately serve many people, in addition to growing your customer base. How can banks help unbanked residents understand that their finances are much safer inside of the U.S. banking system?

As this information makes clear, a significant number of unbanked and underbanked people in the United States would likely be willing and able to take advantage of accredited financial institutions as a means to building wealth and striving for the “American Dream”.

However, language barriers stand in the way.

To overcome these challenges, banks need to establish reliable language access solutions that include translation of written documents and interpretation of conversations to serve LEP consumers. All bank branches should develop community outreach programs to provide LEPs with in-language educational information explaining the true value of establishing bank accounts.

Those banks that attract and service LEP customers in the language of their choice will enjoy stronger business results and help more people, like Rosa Lopez, to achieve the American dream.

If you’d like help getting started, we would be happy to talk to you about providing the best language access solutions available for your bank.